Volume and tone controls, in their simplest form, use potentiometers and capacitors.

Potentiometers, more commonly referred to as pots, are variable resistors with three terminals – a circular or linear resistive carbon track with a terminal at each end and a third terminal connected to a moving ‘wiping’ contact which travels along the resistive track. The three terminals are positioned so that the centre terminal is connected to the wiping contact.

Pots are manufactured in a wide range of power ratings but as the power generated by a typical passive pickup is so low (i.e. millivolts generating milliwatts), pots rated at 0.25 Watts are quite acceptable for this situation.  The Centronics pot shown below, as used in some DeArmond transducer pickups, is rated at 0.1 Watts. 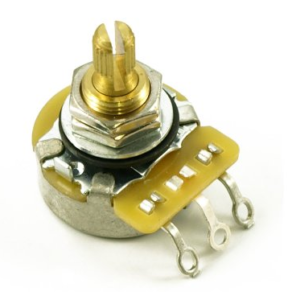 The CTS pot shown above has a 1/4”(6.35mm.) dia. split splined shaft and solderable terminals.

If a knob with a grubscrew is fitted on a pot’s split shaft, the grubscrew must be positioned so that the screw presses on the split in the shaft.  Otherwise, screw pressure will bend and ultimately break off the end of the shaft. 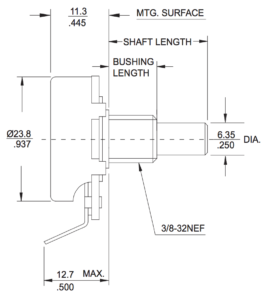 The drawing above shows a side view of the same pot.  The shaft is shown as 0.25″ dia., plain.  The bushing referred to is available in a choice of lengths and in this case, it’s thread is shown as 3/8-32NEF.  As the Les Paul guitar has a contoured body, it requires longer shafts (two different lengths) than a Stratocaster, hence the length options.  Wiper rotation is 300 degrees, common to most pots of this type.

The resistive Carbon track in a Tone pot is uniform along its length (i.e. at the midway point, 50% of the resistance is in circuit), but the resistive track in a Volume pot is not.  The resistance slope is as D below, so at 50% of the wiper’s travel, just 10% of the resistance is in circuit.  This type of pot is referred to as a logarithmic, log or taper pot.  If a pot with a linear curve is used for volume control, a small clockwise turn of the wiper will quickly give a large increase in volume.  This is perceived due to the response of the human ear.  Pots are available in a number of curve options, to suit particular applications, as shown below: 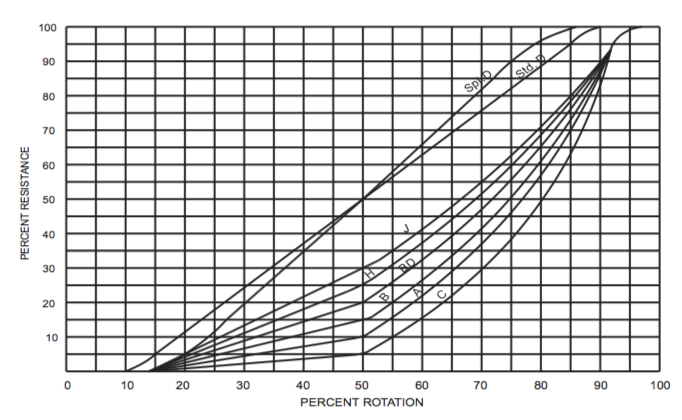 (CTS Technical data above by kind permission of CTS Corporation).

The EIA coding system wisely introduced in America for electronic components helped users identify the manufacturer and the production date.  Some manufacturers added their own information

DeArmond initially used pots with plain 1/4″ dia. shafts in their FH and RH pickups.  They later changed to a smaller pot with an 1/8″ dia. chamfered, split shaft as shown below.  This pot is part of a V&T controls box for a Model 40 flat-tp roundhole pickup.  Note the EIA code on the pot: 1376128, which shows CTS (Chicago telephone Supply) as the maker (137), 1961 as the year of manufacture (61) and 28 as the week of manufacture.

Allen-Bradley pots were used on some DeArmond foot-operated volume controllers such as Models 600 and 602.  These pots were built to withstand the mechanical stress involved in such an application.

Stackpole pots were fitted in the Model 600 pedal.

Because of their compact size, Centralab pots were fitted in the pickup Models 240 (flat-top attachable humbucker), 700 (violin), 750-C (Ukulele) and 800 (Spanish guitar transducer), 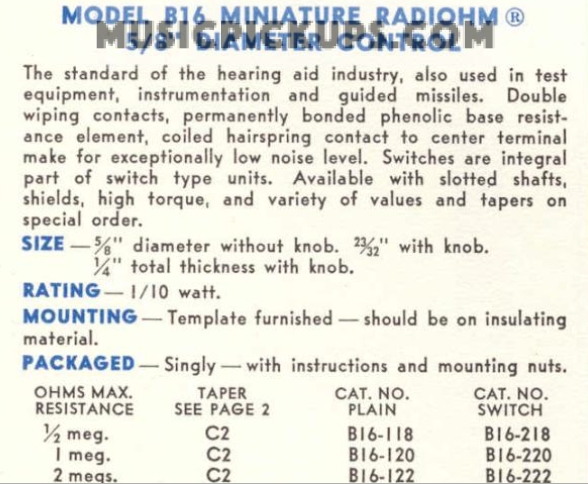 Two extracts from Centralab catalog above. 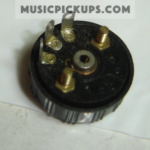 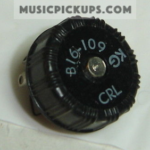 Two views above of a 1K pot, 1st version,  showing the three terminals and two fixing studs (B0541).

Two similar views above of the 2nd version.

The above chart by Centralab from the 1940s shows the wide range of curves then available.  Curves Nos. 3 or No. 6 would be suitable for a volume controller, with a slow initial rise.

In addition to the basic pot types shown above, DeArmond also utilised:

2. Stereo Volume Pedal 1622, using two electrically separate identical volume pots mounted on a common shaft. One pot controls the Left channel and the other controls the Right channel, with two stereo jacks, one an L & R input and the other an L & R output.

A twin gang pot with two different resistance values is used as the tone controller in the Model 610 Combination Volume and Tone Control pedal.

One definition of a Capacitor is:

‘A passive semiconductor with two plates, each connected to a terminal.  When charged, the plates can store energy in an electric field’.

The SI unit of electrical capacitance is the Farad.  The value of the capacitor in the controls box for the DeArmond Model 40 pickup shown is 0.1 microFarads, generally written as 0.1 μF +/- 10%.  It is also rated at 100 Volts.  The +/- 10%  Tolerance figure is the manufacturer’s stated maximum variation from the stated value (see below for more information on tolerance).

If a DC voltage is applied to a capacitor, current will flow for a short period only, dropping gradually to zero, as the capacitor reaches full charge.  If it’s two terminals are shorted, the capacitor will discharge immediately.

If an alternating voltage is applied to a capacitor, a current will flow.  The Impedance (or resistance in an AC circuit) is not the same as resistance because as the frequency in an AC voltage changes, so the impedance changes also.  The impedance is inversely proportional to the frequency, thus allowing higher frequencies to pass through more easily. 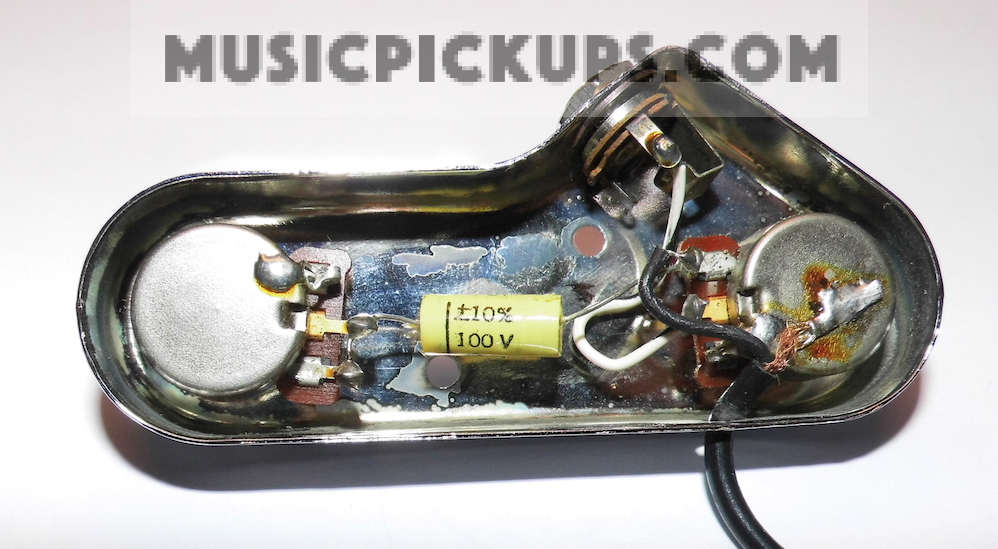 The capacitor is connected between the Volume controller’s top terminal (Hot input conductor and the middle (wiper) terminal on the tone pot (LHS).  The tone pot’s top terminal is soldered to the pot’s case,  earthing it.

The ‘+/- 10%’ above refers to the Tolerance or variation from the stated value of the item.   See the CTS and Allen-Bradley technical data sheets below for more technical information.

CTS Series 450G Data Sheet for their Pots as available 2017.

CTS data above by kind permission of CTS Corp.

Allen Bradley data above by kind permission of Farnell & Allen-Bradley.