Musical instrument pickups of the type produced by DeArmond fall into two categories – electromagnetic and Piezo.

There are two types of electromagnetic pickups.  The first, most common DeArmond type consists of a coil of copper wire, generally of AWG 42 to 45, placed within a static magnetic field produced by a permanent magnet.  Any ferrous object moving within this magnetic field – such as a steel string – will cause a sympathetic fluctuation in the magnetic field.  This fluctuation in the induces a corresponding voltage and waveform in the coil, which is then amplified.  The majority of DeArmond pickups operate on this principle.

The early DeArmond pickups such as the basic plain chrome type also known as the Hershey bar type, the FH and RH attachables, the S-grille, the Diamond-grille, the multi-diamond grille type and others employed one bar magnet.  The main disadvantage of this type of pickup is that the magnetic field strength is the same across every string, which can result in an uneven response as heard by the human ear.

The Model 1000 pickup is unique in that it has one coil that was first wound around the pole-pieces for the four lowest strings (G, D, A and E) after which the pole-pieces and spacer for the top E and B strings were inserted into the coil former.  The coils wind was then continued around all six pole-pieces.  Less coil turns around the High E and B strings resulted in a comparatively weaker signal from those strings.  DeArmond referred to this procedure in their literature as their ‘Duo Form’ method of winding.  It was time and labor-intensive and contributed to the comparatively high breakage rate of the winding wire.

The second type of electromagnetic pickup consists of a coil of copper wire placed within a magnetic field as before, but this type does not depend on proximity to the strings.  Instead, a ferrous plate is placed within the magnetic field and the pickup itself is placed against the soundboard of the instrument.  This ferrous plate is the base-plate of the pickup.  As the soundboard vibrates, the metal plate vibrates in sympathy with it and this induces a corresponding voltage and waveform in the coil which is positioned against the plate, with the same result as before.  The DeArmond pickups employing this principle are the models 700, 750, 750-C, 800 attachable transducer pickup for roundhole flat-top Spanish guitar (not to be confused with the Model 800 TremTrol) and Model 900.

The magnet shapes commonly used in electromagnetic pickups are the flat bar (as in all DeArmond humbuckers, Hershey Bar types, models RH/RHC and FH/FHC and un-numbered others), the pin or rod (as in Models 210, 700, 750, 900, 2000, RH-B/RHC-B, Fender Coronado guitar pickups with Black T insert and many others) and flexible rubberised strip with magnetisable particles (as in the four-Vee guitar and bass pickups, the four-scroll/moustache pickups with individually adjustable pole-pieces, the all-chrome Fender Coronado guitar pickups, the Autoharp pickup Model 1300 and many others.

The Magnetic Field Strength values published by DeArmond in some of their 1980s catalogs are as follows:

The Tesla is the Standard unit of magnetic flux density.  One Tesla = 10,000 Gauss.  The Earth’s magnetic field strength on the surface is approx. 0.5 Gauss.

As the transducers Models 500 and 700 employ a visually very similar magnet arrangement, their magnetic field strength values are likely to be as the transducer Model 800 above.

The main factors influencing the sound of an Electromagnetic pickup – within the pickup itself – include the magnet’s physical size and shape, its composition (Alnico 3, 4 or 5 or rubberised magnetic material), the strength and shape of the magnetic field, the shape of the coil, the wire gauge (diameter), the number of turns, the wire’s insulation thickness, the positioning of the coil relative to the magnetic field and the resonant frequency of the installed coil.  In addition, the pickup components that may influence the magnetic circuit such as, in the case of the early version of the DeArmond model RHC shown below, are the steel baseplate, the brass cover, the steel springs and screws.

Once the signal has managed to make its way out of the coil, it passes through its co-axial lead (with its own capacitance) to the volume and tone controls, switches and internal wiring within the guitar and from there, through the external lead or wireless connection, to the amp.  Each one of the components in this chain introduces some measure of resistance, capacitance and inductance into the circuit, every one of which can influence the sound of the pickup. Then there is the amp itself, the environment and lastly – your own ears.

The two photos above are taken from U.S. Patent No. 2089171 dated August 10, 1937 for the Rickenbacker ‘horse-shoe pickup’ as granted to George Beauchamp (reproduction of the Rickenbacker Patent above is by kind permission of the United States Patent and Trademark Office).
The first illustration above is a cross-sectional view through the pickup.  The second illustration shows the magnetic lines of force as focused through the strings and pole-pieces.   This pickup’s coil, former and pole-pieces are similar in appearance and configuration to a basic single-coil Fender Stratocaster pickup.The six pole-pieces are not magnets themselves but the two horse-shoe magnets are placed in such a way that the magnetic field’s shape and alignment in the vicinity of the strings is quite similar to that in the Strat pickup mentioned above. The strings are placed between the horse-shoe magnets and the top of the pole-pieces. This pickup comprises a number of machined components which would have been costly to produce.  It pre-dates the Strat pickup which, being of a later design, shows a different approach to providing the necessary magnetic field and has less components.

The insulation on copper winding wire currently used for pickups is a type of polyurethane whose melting point is the same as that of solder. This is no coincidence but is the product of several years of research.

When Rowe Industries first began manufacturing pickups, that wire was covered with an enamel varnish, as was standard for the time. The melting temperature of that varnish was much higher than the melting point of solder, so that the varnish could only be removed safely by the use of a fine emery paper. This method was time-consuming and resulted in a high wire breakage rate which affected costs.

Copper winding wire manufactured in America is produced in a range of diameters known as AWG – American Wire Gauge. As the diameter of the wire decreases, the AWG number increases, as can be seen in the table below.  Britain uses a similar system called the Standard Wire Gauge or SWG which is slightly different dimensionally to AWG.  Continental Europe bypasses the confusion of a Gauge system by referring to  diameter in Metric units.

A range of typical wire gauges as used in guitar pickups is shown below: 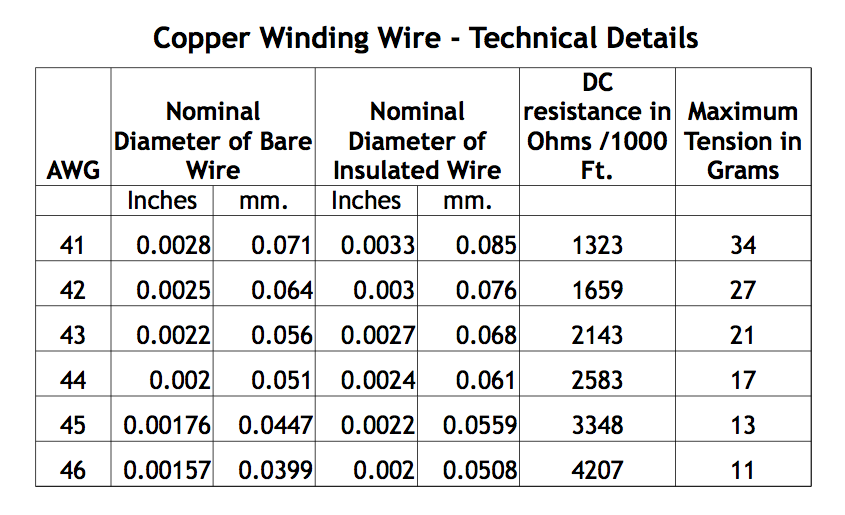 (Data shown is Copyright Essex Wire of Indiana, USA. This company is one of the suppliers to the original DeArmond companies)

The thickness of insulation depends upon the type used, with the older enamel varnishes being in some cases thicker than the polyurethane types. Also, insulation can be applied to the copper wire in more than one layer, which results in a greater overall diameter for the same copper conductor size.

The availability of a choice of insulation thicknesses may not seem important for a guitar pickup but if a vintage pickup is to be rewound accurately, the correct AWG copper wire, thickness of insulation and number of turns all must be used.

Take for example, a 1954 Fender Stratocater pickup. According to an analysis of one of these pickups by Seymour Duncan’a Research Laboratory, the wire type was 42 AWG with Formvar Heavy Build Insulation as opposed to Single Build Insulation. This resulted in an overall diameter of 0.003 Inches for the wire. This diameter is coincidentally the same as that shown in the Essex Wire table above.

Some vintage pickup fans maintain that only Formvar insulation will ensure an authentic rewind for this pickup, but this is simply not true.  Formvar, in common with all other types of winding wire insulation, has no effect on the pickup’s magnetic field or its sound.  The thickness of the insulation is the only consideration.

However, If a pickup is rewound with a wire of the same gauge and the same number of turns as before but with thinner insulation, its sound will not be as before.  This is because the coil will be thinner than before, resulting in a smaller magnetic ‘footprint’ under the string.  If the coil is wound to the same outer dimension as before, its DC resistance and impedance will be increased, resulting in yet another change in its sound.

Piezo pickups operate on the principle that if pressure is applied to opposite sites of a crystal, a corresponding voltage is induced in two other opposite sides.  The DeArmond pickups employing this principle are the models 3000 for guitar, 3010 for ‘any treble clef instrument’.  Model 3200 for piano and harp is unique in having two Piezo heads for mounting directly on the instrument and a controls box containing bass and treble boost pots and a master gain pot with switch.  This unit is powered by an internal 9 Volt battery.

Piezo pickups were initially expensive but they are now among the cheapest available.  The Impedance of this type of pickup is approx. 1 Megohm, so they are not good when run through long cables.  They should ideally have a preamp in the instrument itself.

The transducer type were used with instruments that did not use ferrous metal strings.