NOTE: See bottom of this page for information on the various versions of the DeArmond Model 2000/Dynasonic guitar pickup currently available.

The DeArmond Model 2000 pickup, introduced in Gretsch’s 1949 catalog, was the first guitar pickup with six individually adjustable pole-pieces.  The clever design enabled the height of each individual pole to be easily adjusted using a screwdriver, without disassembly, removal of any parts, or loosening the strings.  Placing the height adjustment screws to one side of the strings gave this pickup an iconic appearance.

This pickup was available in one height only, until some point between 1957 and 1961, when a taller version was produced.  Up to that time, the pickup located at the bridge was seated on one or more spacers to achieve equal distance between each pickup and the strings.

See above, the Model 2000-B Guitar pickup, original version, neck position.  Metal frame height is 7/16″ ( 11 mm.) from flange to top of pickup.  The first picture shows the underside of the pickup, with the brass rings crimped to the ends of the pole-pieces and the six screws threaded into the brass rings.  The second picture shows the six magnetic pole-pieces and the six screws for adjusting the poles’ height.  Finish options initially were chrome with black coil former or gold-plated with white coil former.

Gretsch was the first guitar manufacturer to offer this pickup as standard, and referred to them in their literature as ‘Gretsch-Dynasonic’ and ‘Dynasonic Fidela-Tone’.

Some time later, Guild fitted the standard Models 2000-B and T into some of their instruments

This pickup has been accurately reproduced in recent years by Seymour Duncan, who refers to them as the ‘Dynasonic’.  TV Jones introduced a very similar version and more recently Cordoba, who have already produced their versions of the DeArmond Rhythm Chiefs Models 1000 and 1100, have also a Model 2000.

In the mid 1950s, Gretsch produced a small quantity of solid-bodied Electric Tenor guitars based on the Duo Jet 6128, each fitted with two four-pole versions of the Model 2000 pickup in chrome with black coil formers, as seen above.  The metal frame and the coil former were as in the guitar version, but with the two outer holes filled in (photo copyright Tommy Tucciarone) 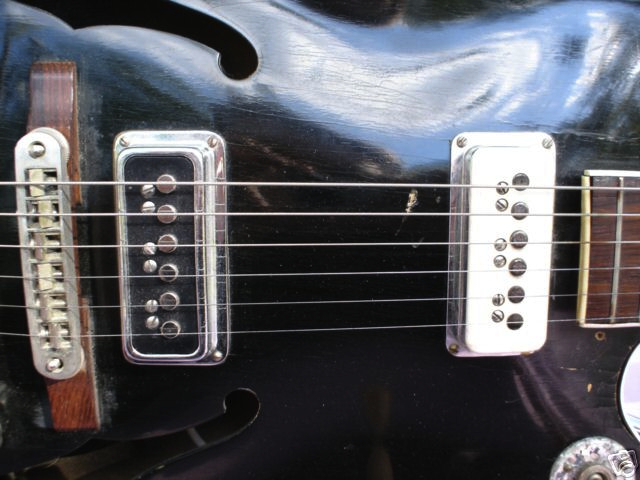 These two different pickups, one on the left, a standard Model 2000 and the other on the right, a variation with a white coil former with no visible top fixing screws, are shown fitted in a Premier Bantam De Luxe guitar. 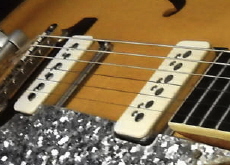 Two similar pickups as the right-hand example above, in a Premier guitar.  This particular pickup version, excluding its metal frame, was used extensively by Les Paul in a prototype guitar during his development of the Les Paul guitar.

Three other companies, CF Martin, Kustom and Standel, specified cosmetic alterations to the Model 2000’s brass housing.  Where the original model 2000 had a rectangular top ope, Kustom’s version had a trapezoidal ope, and CF Martin’s had an irregular ope, all as shown below. 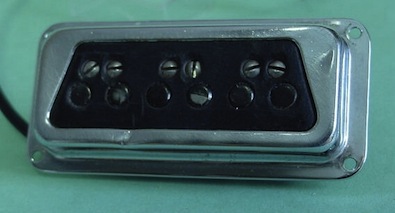 This neck and bridge-mounting variation on the standard Model 2000 was fitted in a number of Kustom guitars, including the K-200 and others.  The Kustom pickups were all chrome-plated with black coil formers.

CF Martin fitted this version with an irregular ope in their flat-tops.  The 00-18E had one pickup, while the D-18E and D-28E had two each.  Note the two different locations for the bridge pickups in the first and third photos above. 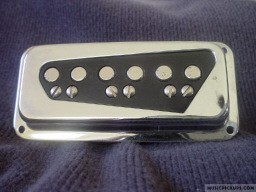 CF Martin’s F series of electric archtops were fitted with a neck and bridge-mounting pickup, again with the same distinctive front ope.  The F-50 had one pickup at the neck.  The F-55 and F-65 had two pickups each. 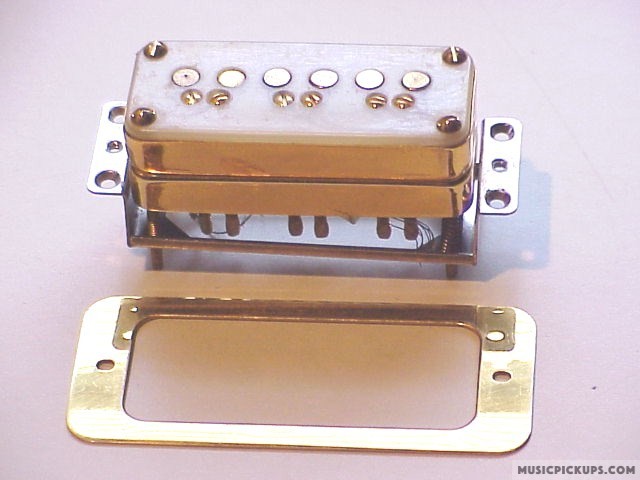 A set of three of these pickups was fitted in the Epiphone Emperor Regent guitar.

This pickup was fitted into the Standel 510-S guitar, in a black/white bezel.

This pickup was fitted in Ovation’s Thunderhead guitar, produced as part of their Electric Storm series of F-hole archtop guitars.  While this pickup is not dimensionally the same as the others above, the view of the underside clearly shows it’s lineage.  This pickup was patented by James H. Rickard  on October 27, 1970 under Patent No. 3,535,968, assigned to the Kaman Corporation, manufacturers of Ovation musical Instruments.

All of the Electric Storm series pickups for guitar and bass were provided with the same ornate molded black plastic bezel with a decorative raised line in the front face.

DeArmond’s Model 2000 guitar pickup – also known as the the Dynasonic – has been the subject of much debate since Fender introduced their excellent range of DeArmond guitars in the late 1990s.  Some of these guitars were fitted with pickups which were intentionally quite similar in appearance and size to the original Model 2000, but with a different internal structure and resultant tone, and referred to as the 2K.  Somewhere along the way, DeArmond’s original pickup was referred to as the 200, and this incorrect name stuck.  This situation has been made more confusing by the introduction of three more Model 2000 replica pickups – this time constructed in the same way as the original – by Seymour Duncan, Gretsch and TV Jones.

See an extract from DeArmond’s 1965 catalog below left, clearly showing the original pickup – the Model 2000, with B and T options: 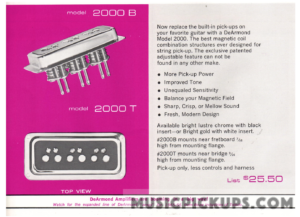 The above pickup is Fender’s Model 2K.  While the upper, normally visible part of the pickup is very similar in appearance to DeArmond’s Model 2000, the underside is very different.  ‘DeArmond’ is embossed into one end of this pickup and is visible when installed in an instrument.

‘Rowe Industries’ is stamped on the underside of the coil former on DeArmond’s Model 2000.  Fender’s pickup uses one flat bar magnet positioned on each side of the poles, creating a similar magnetic field path to Gibson’s P-90 pickup.  Another version of this pickup produced by Fender has six individual magnets as pole-pieces, shorter in length than the original DeArmond pickup.  The two bar magnets are therefore not installed and the resultant magnetic flux path is closer to the original.

Gretsch’s version of the model 2000, above.  The top of the pickup looks just like the original DeArmond version.  The underside of the pickup does not have Rowe Industries stamped into the coil former.  Also, the interior of the metal casing shows a sharp edge, suggesting that it is a casting, whereas the original casing was pressed brass.

The Seymour Duncan version of the original Model 2000 uses a pressed brass casing as the original and is available in a number of options.

The tops of the pole-pieces in the the original Rowe Industries Model 2000 pickups were bevelled and that is carried through to some versions of that pickup currently manufactured by others.  I have read of one possible reason for this in a forum, suggesting that the bevel allows for easier assembly of the pickup.  I would accept this theory in relation to Fender-type pickups with vulcanised fibre ‘flats’, where a tight fit for components is crucial and a bevelled ‘nose’ on the pole-piece would make insertion easier.  However, this would not be necessary in a Model 2000, where clearance between moving components would be built-in.

I believe the the bevel was incorporated to reduce the chance of a player’s fingers being cut by the sharp edges exposed when the pole-piece is raised.  This would be the case with Fender staggered pole-pieces.