The Fred Gretsch Mfg. Co. was the first high-profile manufacturer to fit DeArmond pickups to their instruments when in 1949 they fitted the Model 2000 pickup in all of their electric models.  This arrangement continued until 1957, when CMI decided to fit DeArmond pickups in almost all of their range of Harmony guitars.  At this point, DeArmond’s relationship with Gretsch ended.

Gretsch used gold-plated and chrome-plated versions with black coil formers.  They also used a four-string version of the Model 2000 pickup in chrome with a black coil former for some Tenor guitars.  This particular version used all of the normal components in a standard Model 2000.  The only change was that the holes in the coil former for the two outer strings (the 1st and 6th) were filled in after forming.  Traces of the two outer holes can be seen in the modified pickup.  See example below.

Gretsch literature referred to them as Dynasonic Fidela-Tone pickups.  This name was never used by DeArmond.  Gretsch’s successful association with DeArmond ended only after DeArmond had signed an agreement with The Chicago Musical Instrument Company (CMI), manufacturers of Harmony and many other brands, to supply them with pickups.  When the Model 2000 pickup was first introduced, it was available in one height only – 7/16″ (11 mm.).  This meant that these pickups sometimes required a spacer when fitted at the bridge.  That spacer was manufactured from a type of semi-transparent faux tortoise-shell material, as shown below:

This Model 2000 pickup from a 1954 Gretsch instrument shows the distinctive faux tortoise-shell bezel and the transparent coil former (B0614 photos copyright Gibsondependables).

Rowe Industries, the name of Bud Rowe’s company at that time, was embossed into the underside of the coil former in these pickups. 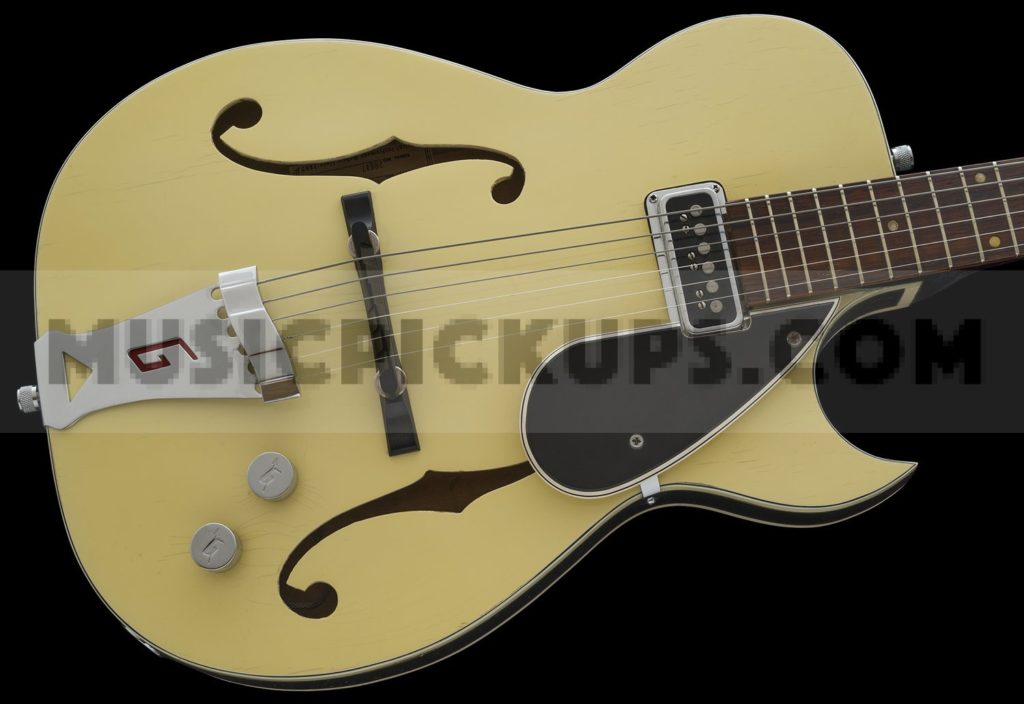 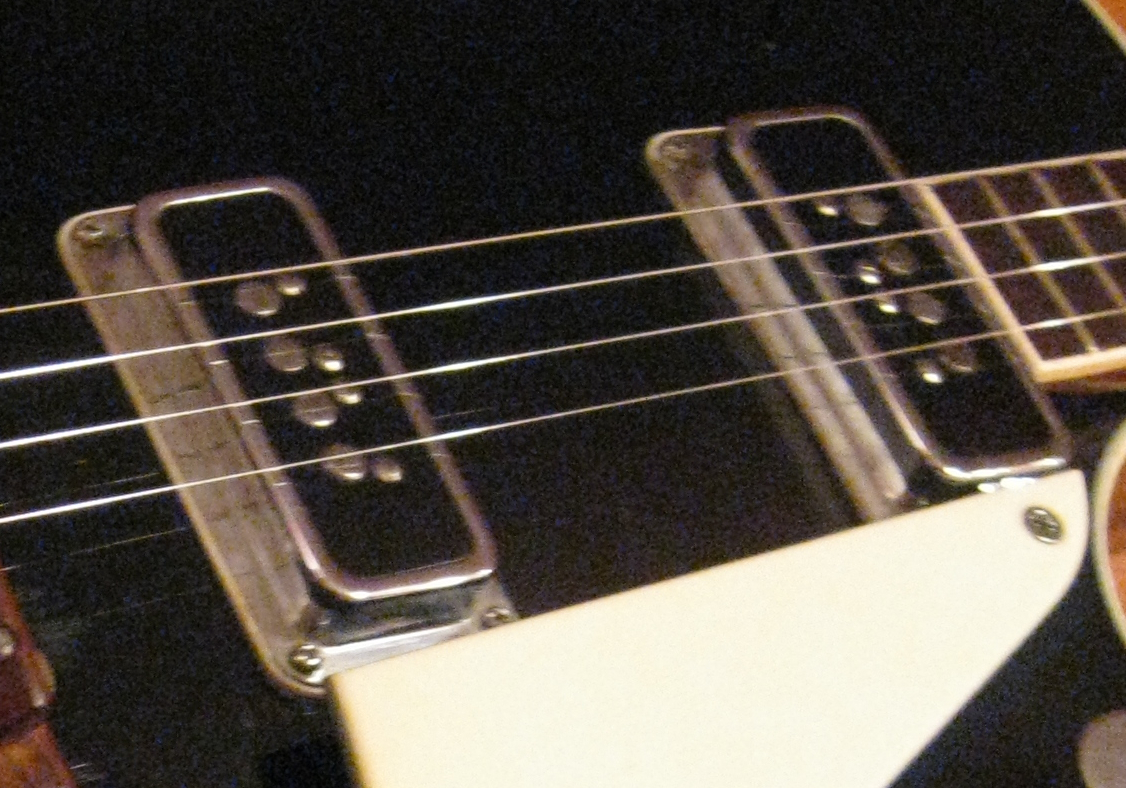 In the mid 1950s, Gretsch produced a small quantity of solid-bodied Electric Tenor guitars based on the Duo Jet 6128, each fitted with two four-pole versions of the Model 2000 pickup in chrome with black coil formers, as seen here (B0070, photo copyright Tommy Tucciarone)

Gretsch Duo Jet Tenor guitar Model 6128 with two 4-pole versions of the  Dynasonic Fidelatone pickup.  Both pickups are the same height. (B0070) 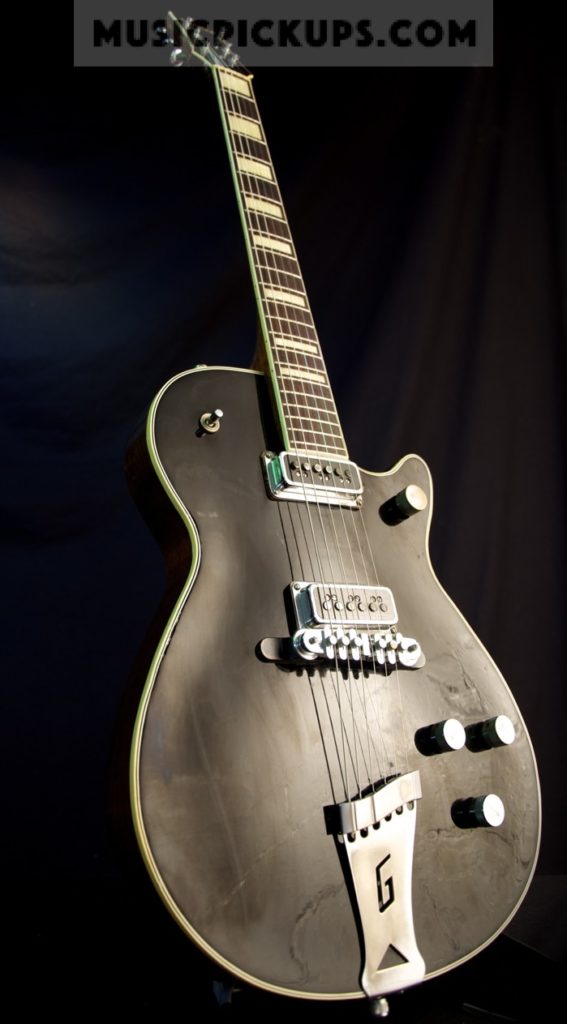 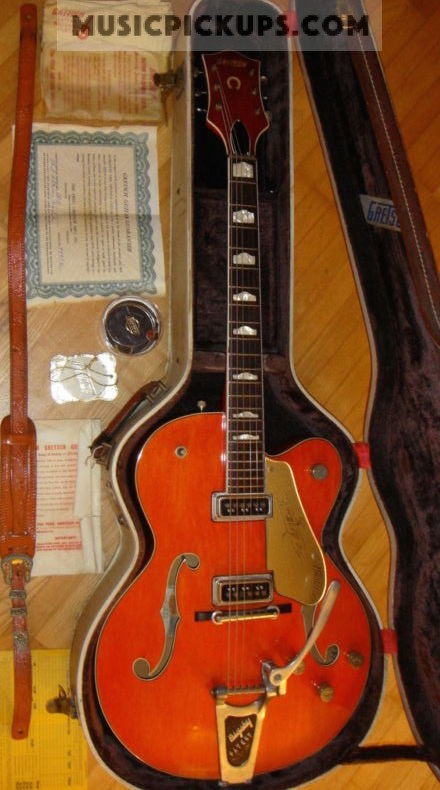 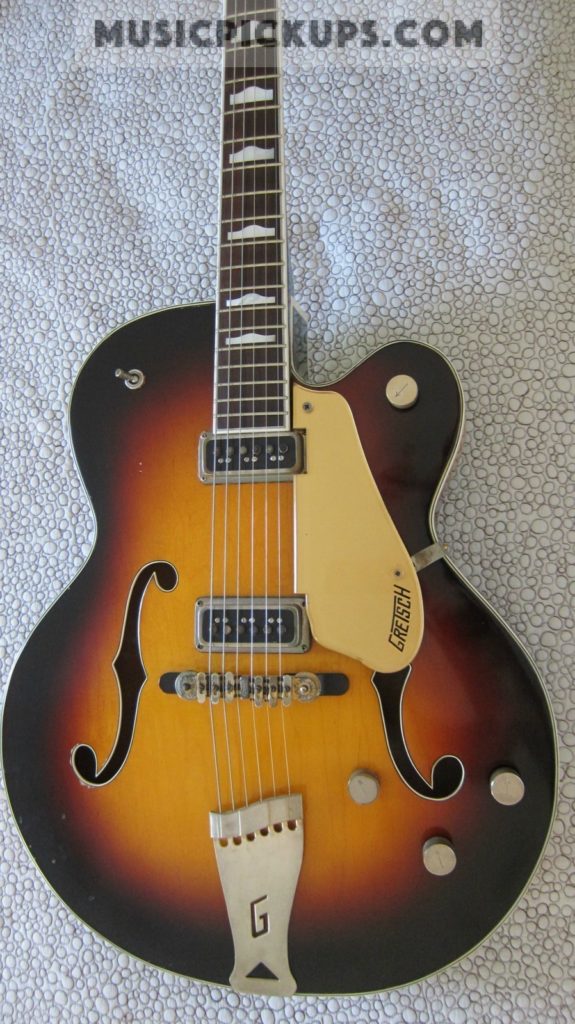