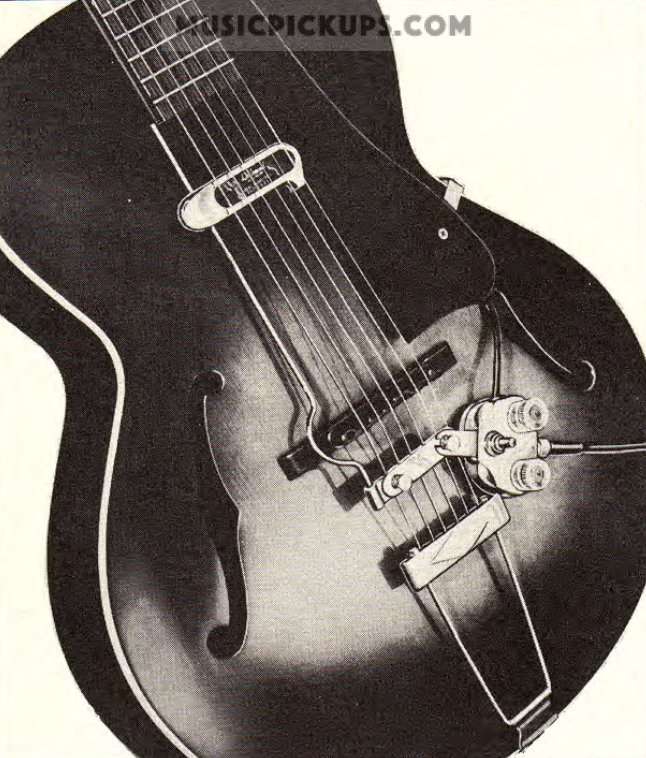 This photo from those catalogs shows the screw connector at the controls box, the two transparent cylindrical knobs with slotted-head grubscrews, the overlapping cover on the V&T controls box and the string clamp behind the bridge.  This is the same photo as shown in Rowe Industries’ October 1954 red fold-out (Form 112 dated October 1954, shown in the ‘DeArmond Catalogs’ page of this site) featuring the Model 1000 Rhythm Chief.

This guitar pickup was designed to produce a more even output across all six strings of the guitar than their previous FH pickup series.  Prior to the introduction of the Model 1000 pickup, DeArmond’s FH series of pickups – the FH (earliest dated 1941), FHB and FHC-C were all quite similar to each other in appearance and specifically designed for archtop instruments, with the option of a volume controller.

This pickup was originally produced in chrome only, with a maroon insert.  This was replaced later by a red insert.  A gold finish option was first introduced in the July 1965 Rowe Industries Inc. Mauve catalog, Form No. 215, with the CF martin archtop on the cover. 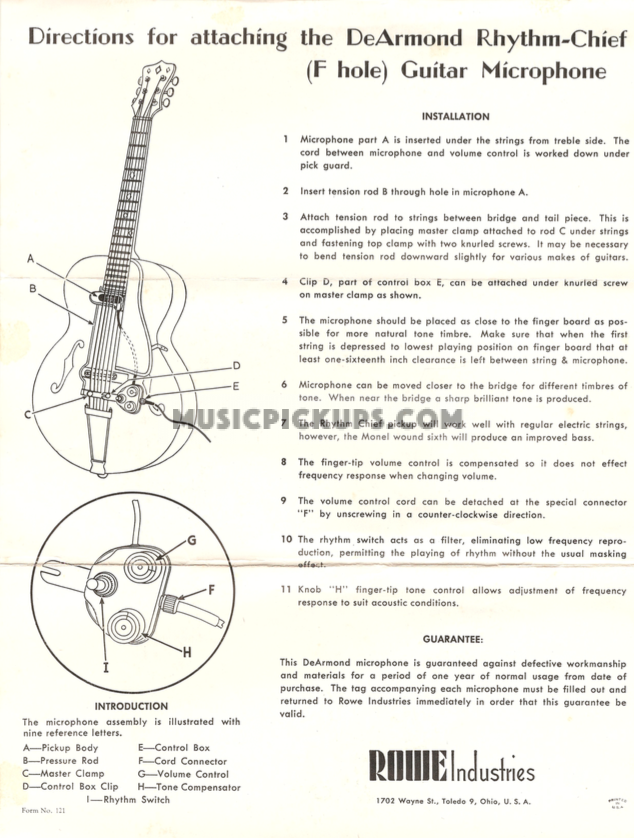 Above, the installation instructions leaflet for the Rhythm Chief pickup.

The method of securing the pickup to the instrument was the same as that used in the FH pickup – the pressure rod (B), the master clamp (C) the control box clip (D) and  the cord connector (F).

An optional short offset rod used to fit the Model 1000 Rhythm Chief and model 1100 directly to the guitar’s neck was also produced.  This rod can also be used to attach the FH series to the neck.  Although this item was first produced in the 1950s, the first time it appeared as a separate item in DeArmond’s sales literature is in about 1975, in their orange catalog.  The item numbers given to it are 390-00070-90 for chrome and 390-00071-90 for gold.

A. Pickup Body or head:

The photo above shows the head with the original maroon insert and the text clearly legible – normally this is not the case.  The tab for locating under the pickguard is seen on the right hand side.  The hole in the opposite end of the pickup through which the pressure rod is inserted is also clearly visible.

The chrome-plated brass cover is a press-fit and may be removed by gently prising it off against the steel base – but very carefully.

The controls box (which is common to both Rhythm Chief Models 1000 and 1100) comprises a brass pressing with a steel baseplate housing a volume control, a ‘tone compensator’ (a passive tone control) and a ‘Rhythm Switch’ – a push On/push Off switch manufactured by Leviton and no longer in production – that brings a capacitor into the circuit to change the tone and output.  The first version of the controls box below included a screwed connection for the outgoing cable, an overlapping steel cover, transparent cylindrical knobs, an L-shaped control box clip, riveted to the edge of the control box and terminating in a U-shaped slot for fixing under the bridge  and a maroon insert, all as shown below: 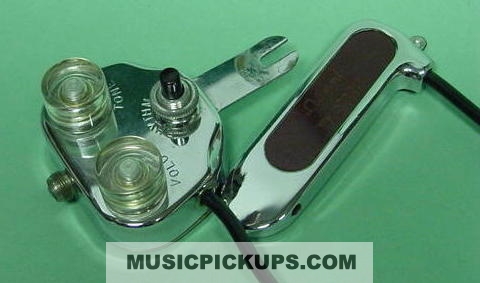 The controls box interior view below shows two very old pots – the Volume on the Left and Tone on the Right), the underside of the Leviton switch (I), the incoming cable from the pickup head, the screwed outgoing connector, the part of the control box clip (D) that extends and three capacitors. 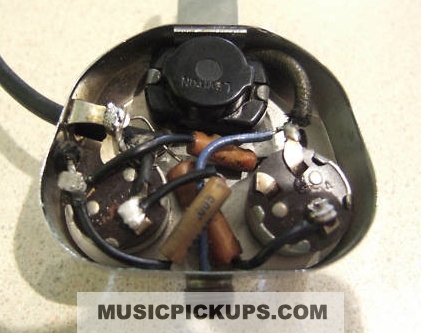 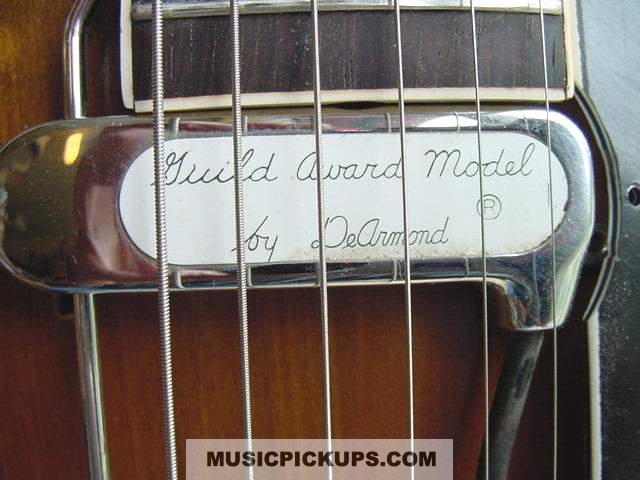 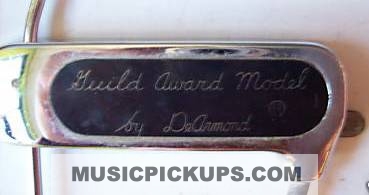 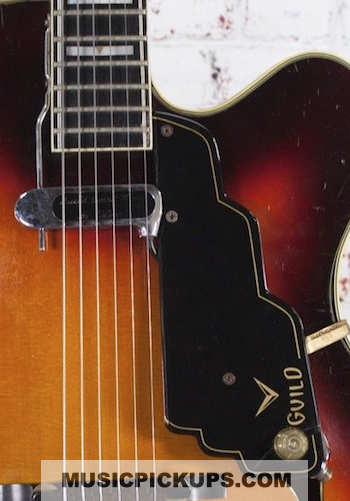 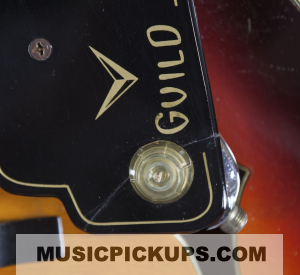 The two photos above show a 1964 Guild Johnny Smith Artist Award model archtop with the pickup and volume controller fitted.  The pot box is the same as that used in DeArmond’s pickups models 400 and 500, as shown in DeArmond’s 1965 catalog.(two photos above (B0556 copyright Manchester Music Mill, New Hampshire, USA). 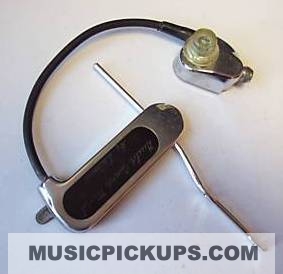 This photo shows the complete Artist Award kit as supplied by DeArmond, including the short fixing arm for the pickup.  Note the hardwired potbox containing the volume controller.  The box is a brass housing finished in chrome or gold, that was fixed under a corner of the pickguard, being held in place by the locking nut on the volume pot.