Music Industry-related events involving other music companies are included below, to present a more comprehensive and informative timeline. 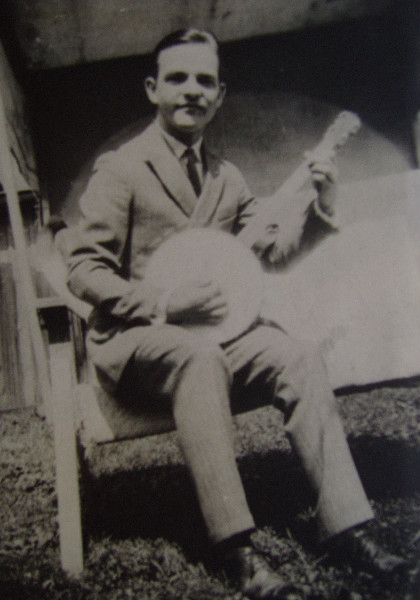 1922: Harry DeArmond, aged 16.  From the 1930s Harry was employed as a design consultant by Rowe Industries and the other subsequent music-related Rowe companies until his retirement in 1975 (Photo copyright DeArmond Estate).  He was also an accomplished musician, playing guitar and piano.  He played with several groups and orchestras and was featured in Gibson’s literature as an endorsing musician.  He could play two guitars simultaneously and developed this technique to a high degree.  Jimmy Webster, Gretsch’s promoter and designer and a friend of Harry’s, was so impressed  that he became an outstanding exponent of it. 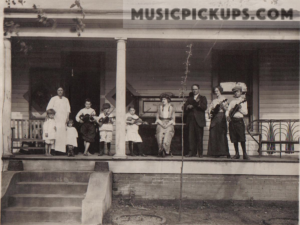 1911: Harry with his parents and family on the front porch of the family home in Fulton, Kentucky.  Harry was five years old at this time (Photo copyright DeArmond Estate). 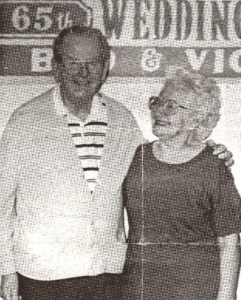 Harry’s business partner ‘Bud’ Rowe and his wife, Viola (Photo courtesy of Toledo Public Library, Ohio) on the occasion of their 65th wedding anniversary, on August 31, 1994.

Bud was born in Toledo, Ohio in 1906.  His background was in electronics and this business continued past the time when the music side of the business was sold off in the 1980s.  Bud retired in 1976.

Bud Rowe was an enthusiastic member of Toledo Yacht Club, from where he sailed his 42 Ft. vessel, The Electra.  He was at one time elected Commodore of the club.  He also owned several horses.

1935: The name of the company was changed to Fox Sound Equipment Corporation, located at 3120 Monroe Street, Toledo.

1937: George Beauchamp of Ro-Pat-In Corporation (later renamed Rickenbacher and later still, Rickenbacker) was granted U.S. Patent No. 2089171 (dated August 10, 1937) for the Rickenbacker ‘horse-shoe pickup’.  This semi-recessed pickup was factory-fitted in the company’s lap-steel ‘Frying Pan’ instrument, so nicknamed because of it’s distinctive shape.  See the Patents page on this site for more detailed information on the Patent and the pickup itself.

1938, Approx, (date to be precisely confirmed): Fox Sound Equipment Corporation introduced the FH/FHC and the RH/RHC pickups for archtop and roundhole flat-top guitars. 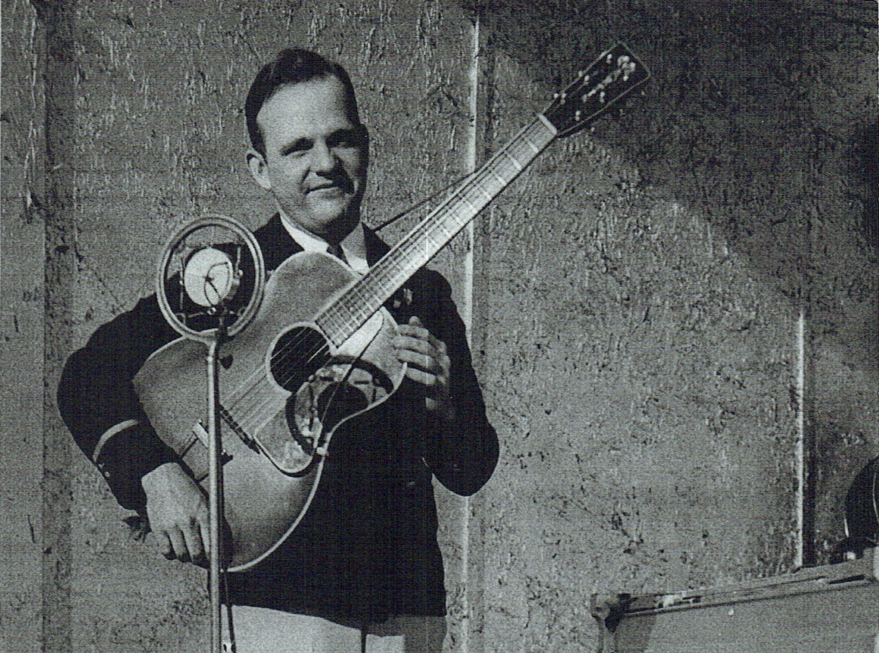 Harry DeArmond, during his time with the Billy Sims Orchestra, in Toledo in the 1930s.  His guitar shown here is a CF Martin Model C-3 archtop.  The C-3 was built from 1931- 1935. The fact that his guitar has a round soundhole means it was built in 1931 or 1932 because in 1933 this model had F-holes until it was discontinued.  It was Martin’s most expensive model when it was produced and had a list price of $200.00 (equivalent to $3,500.00 in May, 2020.  (information on guitar kindly provided by Jason M. Ahner, Museum and Archives Specialist, CF Martin & Company.  Photo copyright musicpickups.com). 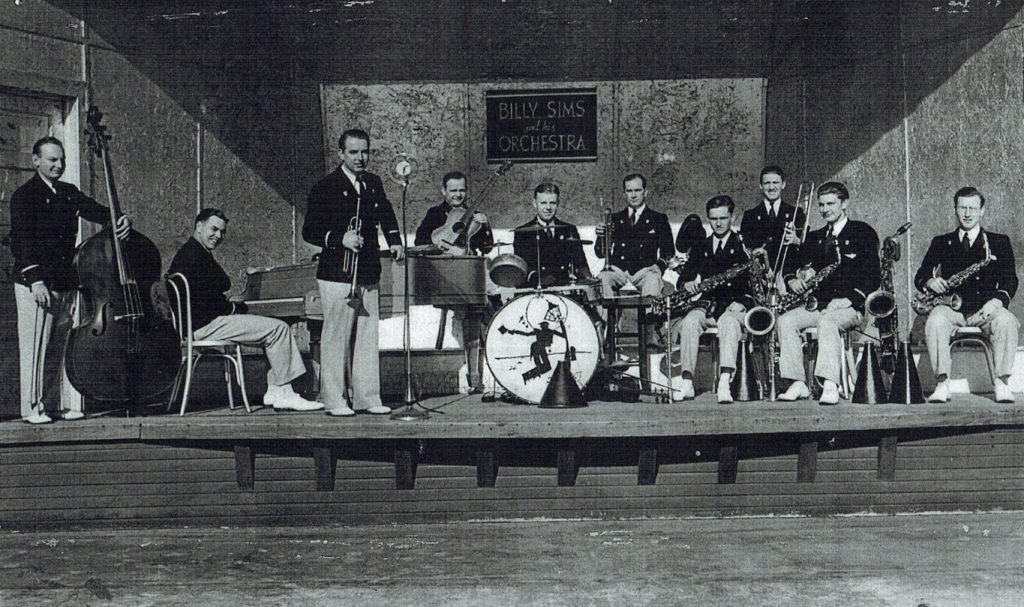 1940: The company name was changed again, this time to Rowe Industries.

1940, August 14: The Gibson Guitar Corporation files a Patent application for an attachable, adjustable pickup for archtop guitar with Walter Fuller as the declared inventor.  This application is granted as Patent No. 2,294,861 on September 1, 1942.  Gibson referred to this pickup as Model E-17 and E-22 (as Model E-17 but with volume controller). 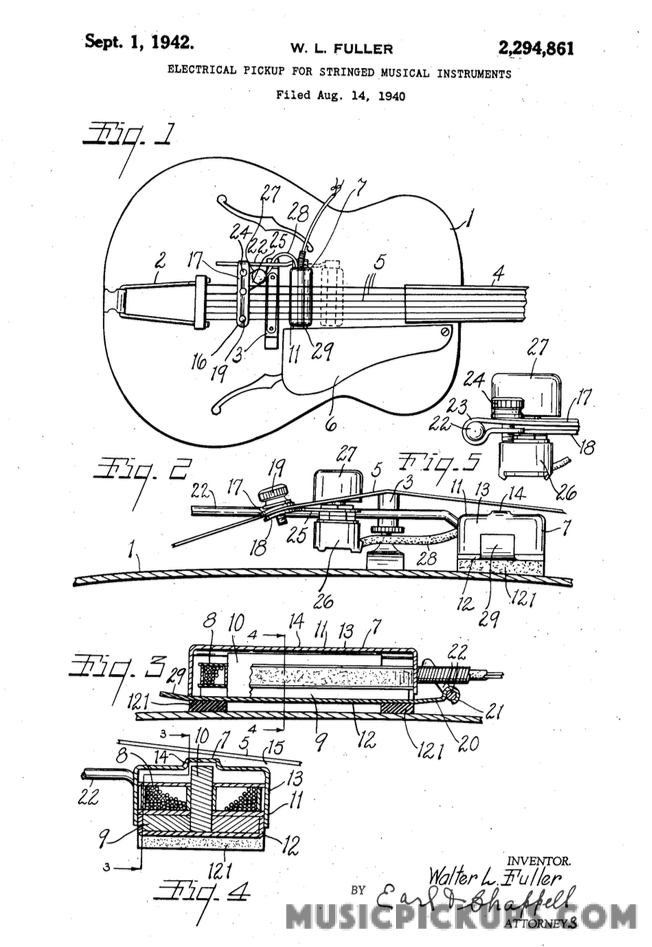 (Drawing above by kind permission of the U.S. Patent Office.)

The cryptic model numbers used in that catalog are as follows:

The suffix ‘C’ above denotes ‘with volume control’.

The later suffix ‘B’ indicated ‘improved’, referring to the more balanced output of the strings.

1942, September 1: The Gibson Guitar Corporation is granted Patent No. 2,294,861 for an ‘Electrical Pickup For Stringed Musical Instruments’.  Originally filed on August 14, 1940 with Walter Fuller as the declared inventor, this patent describes an attachable, adjustable pickup for archtop guitar which is similar in appearance to the Model FHC (see 1940 above, when Patent was applied for).  It is not clear whether this pickup was ever marketed by the company.

1946: The company moved to an old schoolhouse at 1702, Wayne Street, Toledo, purchased from The Board of Education.

1950, The Airport Highway premises was extended by Approx. 100%, by building at the rear of the original structure.  See photos in this section.

1958: An entry inserted in a 1958 Toledo City Directory by Rowe Industries (courtesy Dave Walters).  Harry’s family thought that Harry and Bud made contact initially through an advert such as this:

1963: A DeArmond Model 1000 Rhythm Chief was used in the recording of the theme music for the first James Bond movie, Dr. No.  The session guitarist was Vic Flick from the British group The john Barry Seven.  Vic used a Paragon De Luxe blonde F-hole archtop, with a separate DeArmond volume controller.  See photo below (A0145 photo copyright Vic Flick). 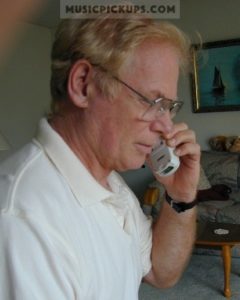 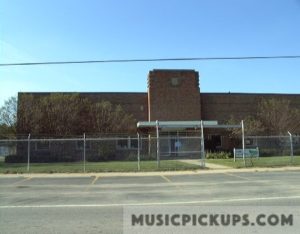 1966: February 2, premises at 6225 Benore Road in Toledo were transferred to Rowe Industries.  See photo of Benore Road premises above.  This building has since been demolished. (photo copyright Dave Walters)

During the 1960s, in addition to their music-related products, Rowe Industries produced components for radar, aerospace and missile defence systems, including the Nike-Hercules missile, the Nike-X, the Apollo moon shot and the B-52 communications system.

1975: Donald Brosnac’s book – ‘The Electric Guitar, Its History and Construction’ is published.  A section on Rowe Industries in included, based on Donald’s interviews with Bud Rowe.  Those interviews will be be added to this site in the near future.

1976: Bud Rowe retired, and later moved with his wife Viola to Mandeville in Louisianna.

1978: July, the Company name was changed to DeArmond Inc..

1984/1985: The final auction of products and parts is held.  It included a lot of vintage items that had been brought from Airport Highway, Toledo.

In 1997, rights to the DeArmond name were purchased by Fender (FMIC) who then arranged for Guild (who had been purchased by Fender in 1995) to produce a range of DeArmond-branded electric archtops, solid-bodied guitars and basses.  Bill Schultz of Fender donated a couple of those DeArmond instruments to Harry and Dorothy DeArmond’s Church in Toledo.  While the new range of instruments, and in some cases, the pickups themselves, were branded ‘DeArmond’, they had no connection with the original Toledo company. 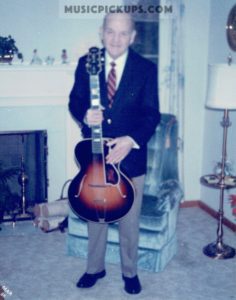 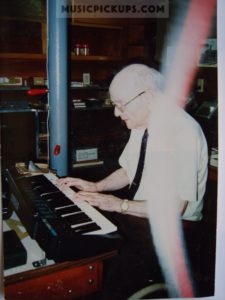 1998: Harry DeArmond playing piano in the basement workshop of the family home in Drummond Road, Toledo:

2004 Original biographical entry for Harry DeArmond written by me for Wikipedia.  That entry has been revised, almost entirely by others, since that date, mostly with factually incorrect information. 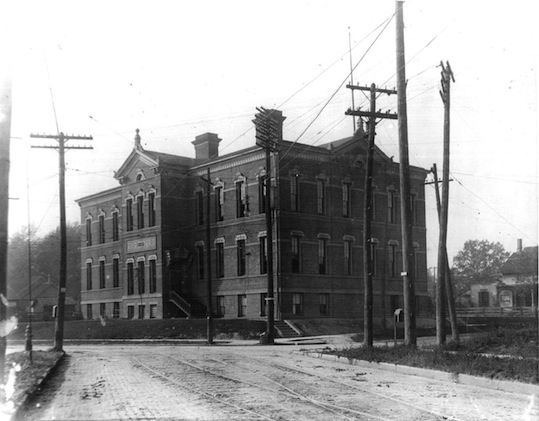 The Wayne School building at 1702 Wayne Street, Toledo, in 1915.  View is looking Northwest.  Rowe Industries purchased this building from the Board of Education in 1946, when they moved from 3120 Monroe Street.  In 1950, the building was extended in size by over 100% (Photo courtesy of Toledo Public Library, Ohio). 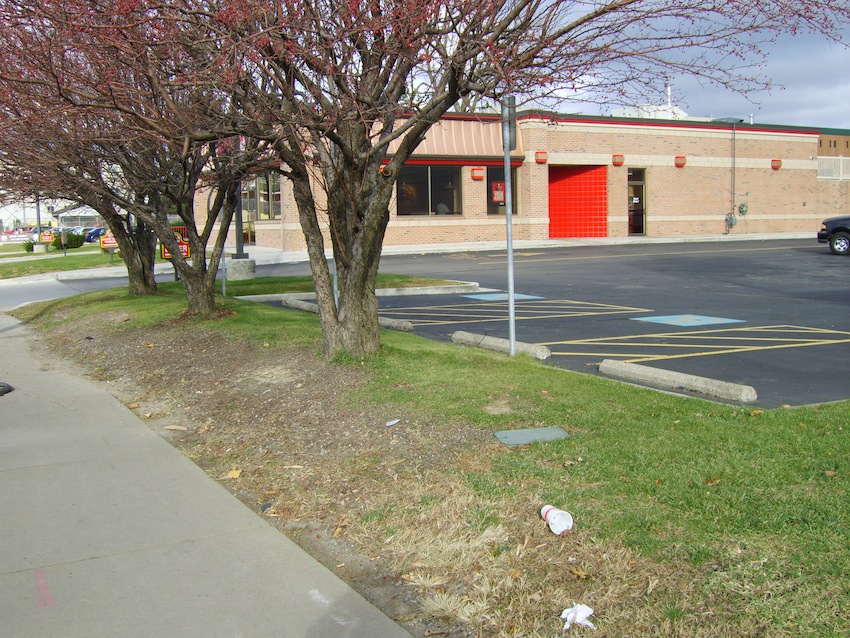 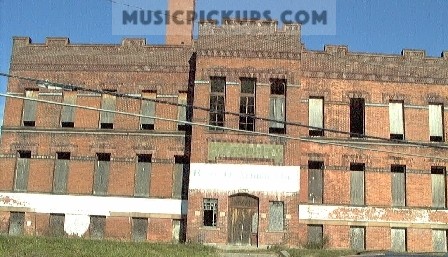 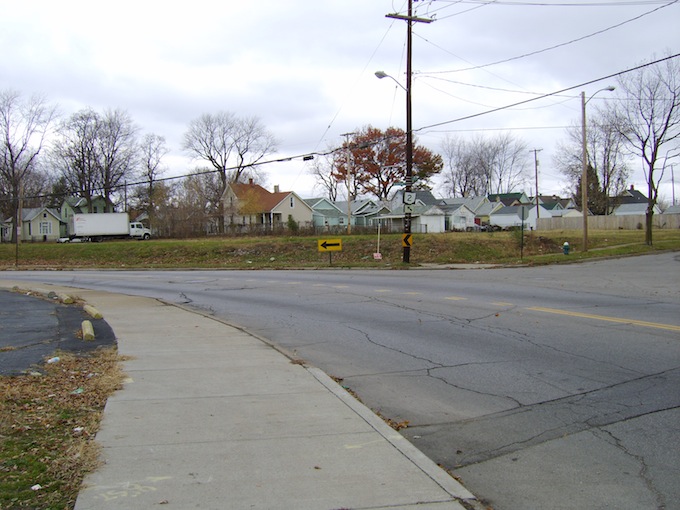 The site of the demolished Rowe DeArmond works at 1720 Airport Highway, Toledo, Ohio.  This section of former Wayne Street was renamed Airport Highway in 1965.  This photo was taken  in 2003 at the same location and looking in the same direction as the B/W photo dated 1915 above (photo copyright musicpickups.com) 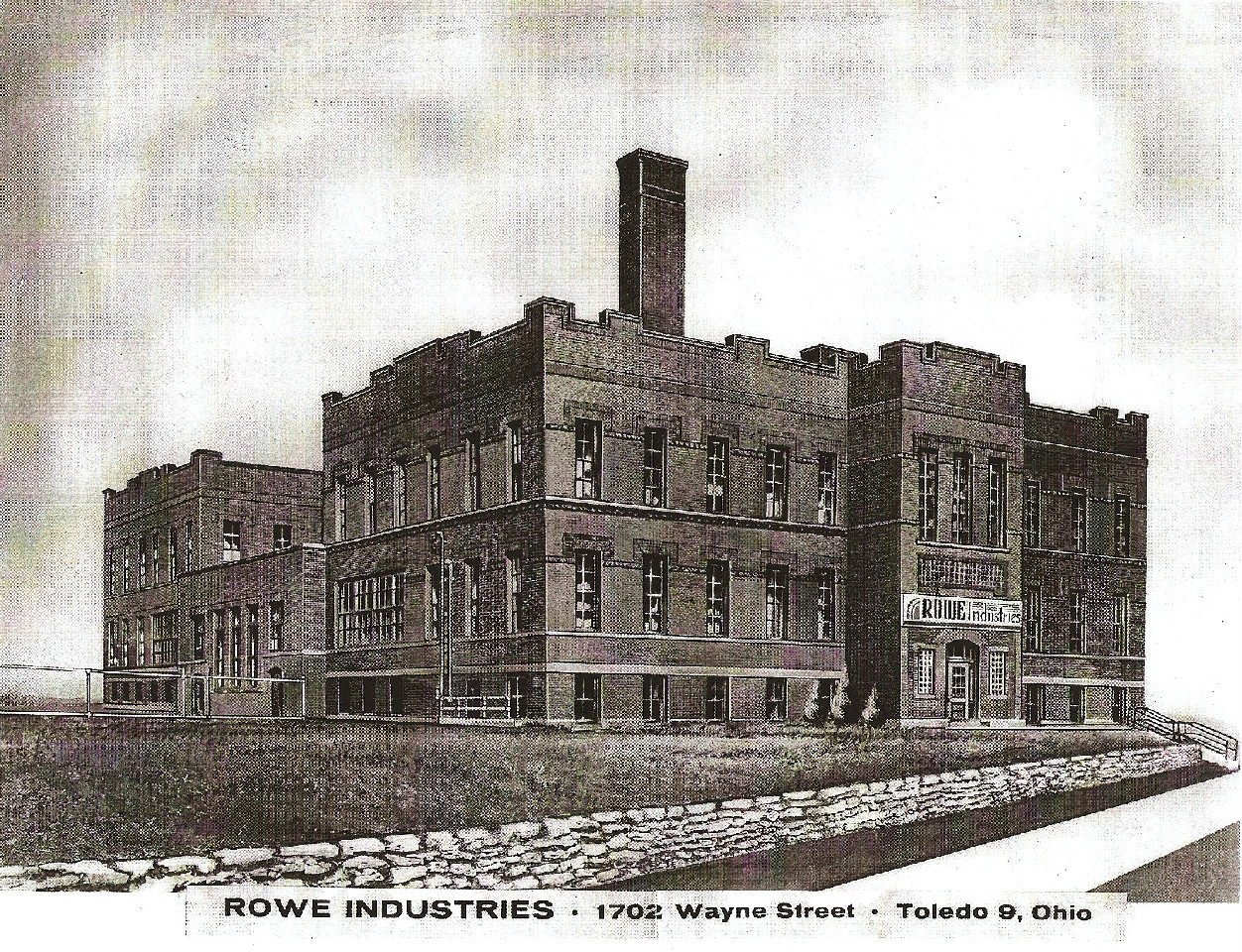 The Rowe DeArmond works at 1702 Wayne Street in the 1950s, after the original front half of the building (RHS of photo) had been extended to the rear (LHS of photo)  by 100%.  This view is looking Northeast. 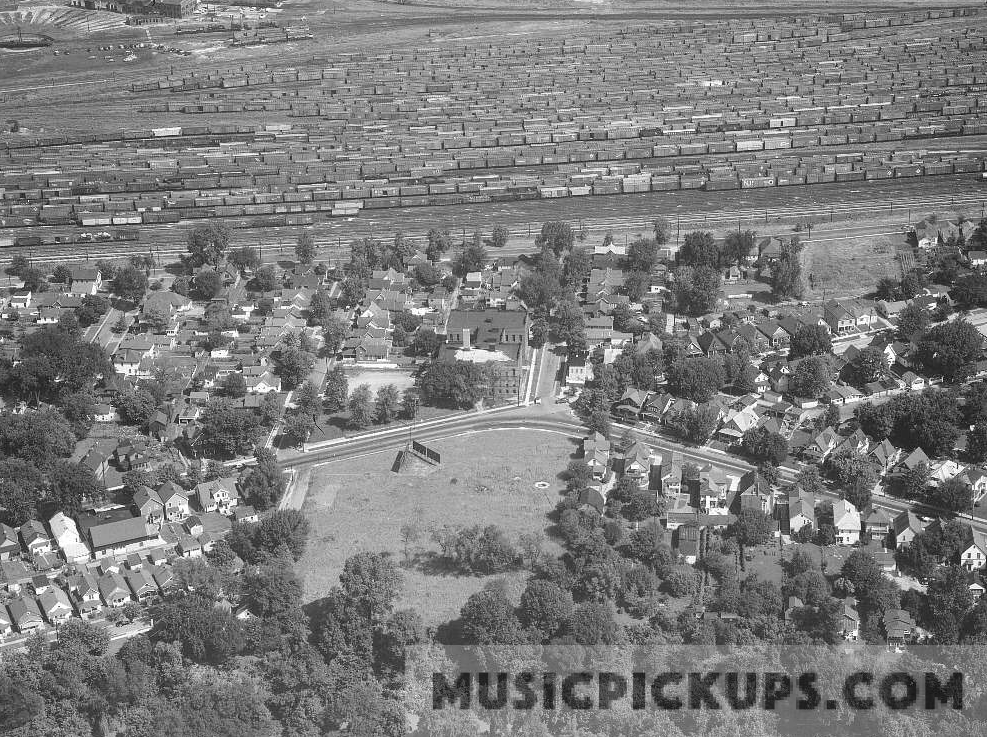 Aerial view of the Airport Highway premises after the 100% expansion, in the 1950s.  The building is in the centre of the photo.  View is looking North.

In the late 1960s, the building was over 60 years old and was sometimes subjected to the vibration of heavy traffic on Airport Highway, outside.  This occasionally resulted in the premises’ lighting fixtures, which were suspended on long catenary wires, swaying and one at least one occasion, falling to the floor..

This building, 4124 Secor Road, Toledo, was the location of DeArmond Research, Harry DeArmond’s own company, from the 1930s to the 1960s.(photo copyright musicpickups.com) 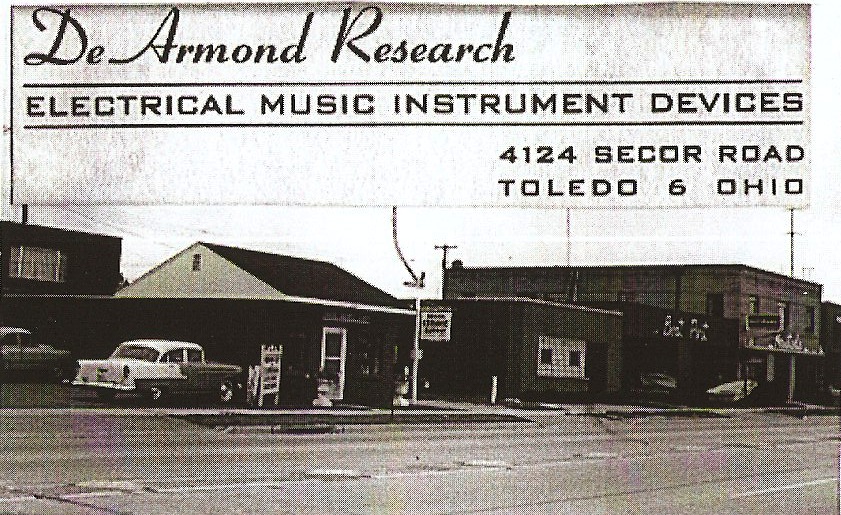 Another view of 4124 Secor Road, taken in the 1950s, from the same angle, showing that the building has hardly changed externally (Photo copyright DeArmond Estate). 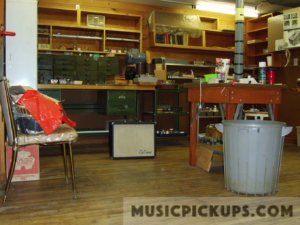 A general view of Harry DeArmond’s basement workshop in the then family home on Drummond Road in Toledo.  Harry’s own amp can be seen in centre.  It was a very early version.  See also in the amplifiers section (photo copyright musicpickups.com) 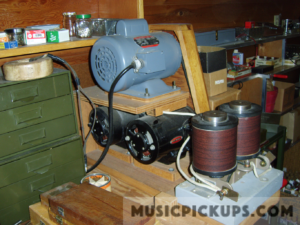 This magnetiser was built by Harry DeArmond, photographed in the basement workshop of his home in Drummond Road (photo copyright musicpickups.com) 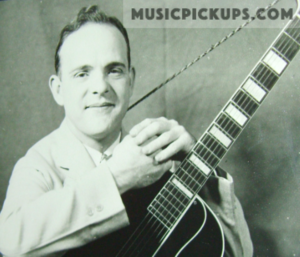 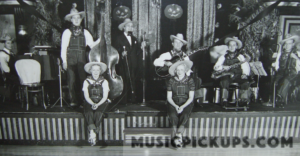 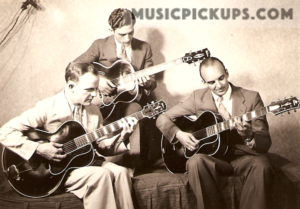 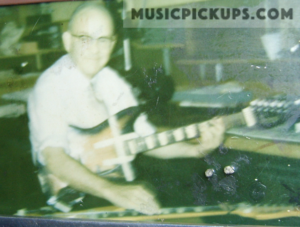 Harry playing two guitars simultaneously, in the basement workshop of his home on Drummond Road, Toledo.  Harry’s unique skill impressed Jimmy Webster so much that Jimmy himself became an outstanding exponent of it (Photo copyright DeArmond Estate). 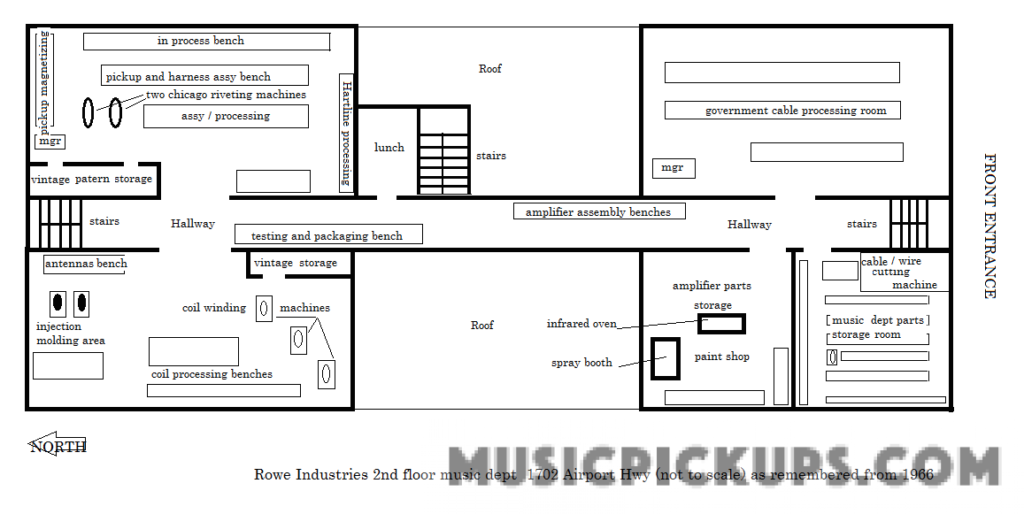 Staff deployment in the mid 1960s:

The whole rear section of the building was allocated to the Music Department which was mostly women, along with Arnold Pickering, the Music Department Manager, Duane Emahaiser and Dave Walters.  Arnold would move some staff as required between coil assembly, wiring harnesses, riveting pickups, magnetising and packaging (including the Machine Shop).

Dave Walters worked in all of the areas – parts storeroom, wire cutting, paint shop, test/repair and driving around town for painting and plating.

Harry DeArmond spent much of his time at his R+D facility on Secor Road in West Toledo (see photo and address above).

A lot of copper coil-winding wire at that time – and completely in the 1940s – was enamel-insulated, which was not melted by soldering.  This meant that the winders – almost all  female, as dictated by the high degree of manual dexterity required – had to use 400 Grade Emery paper to remove the insulation.  This resulted in inevitable wire breakages.  The wire gauges used were 42, 44 and 45 AWG. as required for the different pickup models.

Livonia Magnetics in Livonia, Michigan, about 60 miles North of Toledo, was one of the suppliers of magnets including the rubberised type used later in pickup manufacturing.

Essex Wire of Indiana were one of the suppliers of copper coil winding wire.

Anderson Plastics of Toledo produced almost all of the control knobs.

Nazar Rubber Company of Toledo produced the rubber gaskets used in the baseplates of Models 500, 750, 750-C, 800 (Transducer pickup for roundhole Spanish guitar) and 900.

Chrome and gold plating was carried out by William Whitaker, in Toledo.

Some of those interviewed for this site include:

Tom Ricketts, ex Rowe Industries et al.  Tom joined the company in 1964 – the same year that the Ford Mustang launched.  Tom was my first DeArmond contact and helped me enormously when I began this task, directing me towards valuable contacts and allowing me to interview him twice in Toledo and several occasions thereafter.  Without his time, great help and patience, this site could not have been created.  I am very grateful to him. 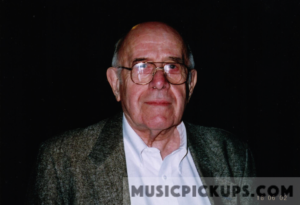 Rex joined the company in 1948 and was involved with the design and development of many of their products over the following 30+ years.  I interviewed Rex in Toledo and he provided lots of anecdotal information on the company, products and procedures.  Rex sadly passed away in July, 2008. 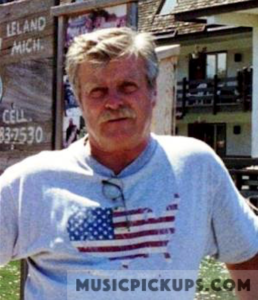 Dave Walters worked with Rowe Industries during the 1960s and continues to be a valuable source of anecdotal and material information on the company, people and products to this site, for which, many thanks. 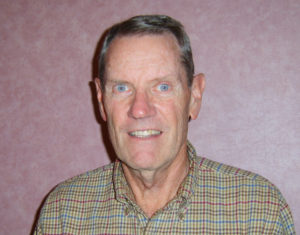 Steve Tosh joined Rowe-DeArmond Inc. on January 4, 1975, from Sunn Musical Equipment Co. in Tualatin, Oregon, where he was a Design Engineer.   In March, 1976, Steve was promoted from General Manager to President and Chief Executive of Rowe-DeArmond Inc. products part of the company.  I met and interviewed Steve in Toledo and he provided lots of anecdotal information on the company, products and procedures.

During his time with the company, he was responsible for the design and introduction of a number of new products and for updating other existing products.  Catalogs showing some products produced by his own company, Tosh Electronics, which he established after the last DeArmond Toledo company ceased trading, are shown in the Catalogs page of this site

Some of Steve Tosh’s solid state designs were originally manufactured by DeArmond and are shown in the Amplifiers page of this site, badged DeArmond.