In 1959/1960, six amplifiers using vacuum tubes (thermionic valves) were introduced under the Rowe Industries name.  Four of these were also branded as CF Martin as follows:

Rowe Industries’ in-house names for the CF Martin-badged amps are shown in brackets after the official names above.

DeArmond catalog extracts are shown with each individual amp description.

The following is a single page extract from a CF Martin Tube amp catalog, covering their four models: 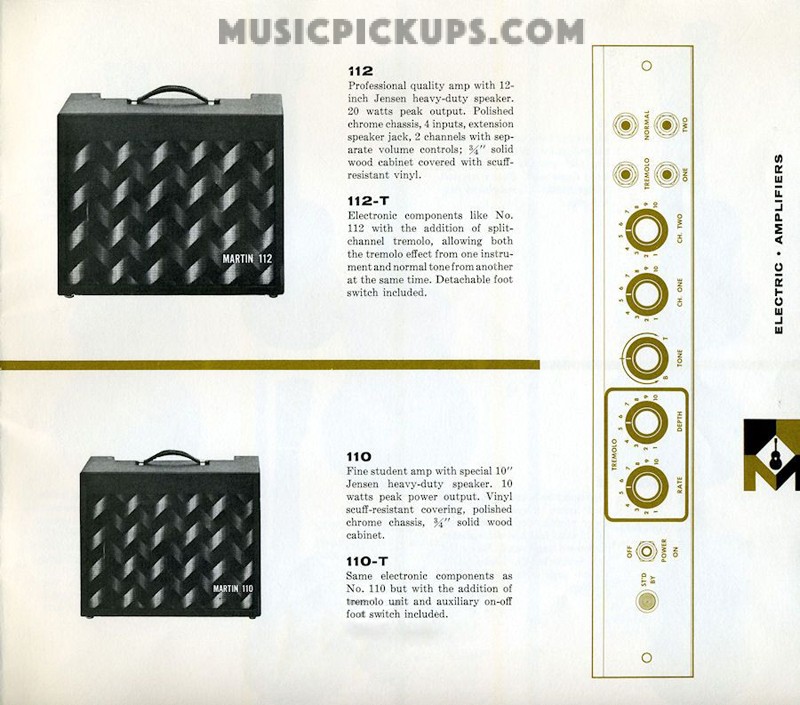 A schematic diagram and operating instructions were supplied with every Rowe Industries and CF Martin amp.  A label was applied to the inside of every amp showing the vacuum tubes layout, the amp’s serial number and on some amps, a code that may identify the employee in charge of assembly and testing.  The amp’s serial number was also rubber-stamped on the inside of the metal chassis.  See typical label below.

The serial number for an R5T amp rubber-stamped on the inside of the metal chassis:

Every Rowe Industries and CF Martin amp with a tremolo circuit , identified with suffix T in its title, was supplied with a foot switch, Model TFS-1, either hardwired or removable, initially by means of a jack socket which was later replaced by a phono socket on the underside of the amp chassis.  The switch itself was manufactured by Leviton, and is the same type as used in the controls box for the Models 1000 and 1100 Rhythm Chief pickups.  The foot switch is shown below: 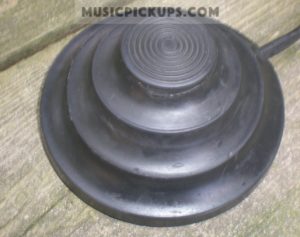 An interesting feature of some tube amps sold under both Rowe Industries and CF Martin brands was the inclusion of one or more electronic circuits in maroon-coloured hard resin encapsulations.  These items were called ‘Erie Packs’ by the employees and were most likely produced in this way in order to prevent copying of the circuits by rivals.

This extract from DeArmond’s tube amps catalog shows the control panel layout for this amp.

This view shows the ‘tubes layout’ label affixed to the inside lower Left-hand side of the amp’s front panel.

The ‘tubes layout’ label also shows the amp’s serial number. This number includes an alphabetic prefix. The aphabetic prefixes already seen include A, B, E, HI, J, JI, L, MH, MK and ML. The logic behind this system awaits clarification.

A schematic diagram and instructions were supplied with every amp. An interesting feature of every tube amp sold under both DeArmond and CF Martin brands was the inclusion of a number of electronic components in one or more maroon-coloured resin-encapsulations. This item is seen is seen at the top of the schematic diagram above, marked EP-9097, with ten numbered leads exiting from it. The item itself can be seen in the lower centre of the amp chassis in the rear view of the amp above.

Three such resin encapsulations can be seen in this photo of an R15-T amp.

Studio amp. This item was designed as a wall-mounting version of the R5T amp, with a built-in stand for sheet music (Photo copyright Grossman Music Corp.)

This is the foot-switch as supplied with every Tube amp manufactured by DeArmond. The metal baseplate of this switch is stamped Rowe-DeArmond.

‘DeArmond Amplifiers are booming in a big way!

Watch for the expanded line of DeArmond “amps” for 1965-66, from Rowe Industries of Toledo.’

The company designed several products that did not reach production.  These included tube amps, pickups and an electric piano fitted with one string.  Depressing a key would change the length of the string to achieve the required pitch, while striking the string.  A small number of prototypes were seen in the company’s by Steve Tosh, the company’s last C.E.O. in 1975, when he joined.  Se the Patent for this item in the Patents section of this site.

Rowe Industries’ schematic drawings exist for the Model R6-T (undated and incomplete) and the Models R30-T and R60-T, both dated April, 21st, 1964.  See below: 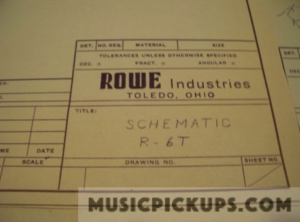 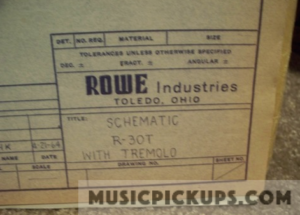 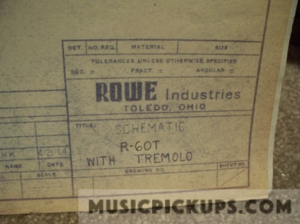 A chassis exists for another amplifier, the DeArmond Model R 10T, complete with copper-finished control panel.  This amp was also not produced commercially. 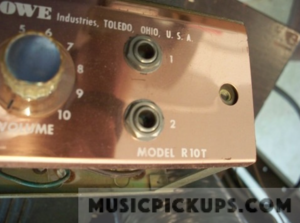 These were as standard DeArmond models with cosmetic differences only, including a different baffle material, black fabric covering, a chrome control panel and black knobs:

Although it has a DeArmond logo attached and a non-standard grille cloth, this in in fact a CF Martin Model 112. The DeArmond logo is appropriate in this case as this was Harry DeArmond’s own amplifier, used regularly by him, photographed in the basement workshop of his home in Toledo, Ohio. Its serial number is F6 2013 (Serial number information courtesy of Charley Barnhart, Harry DeArmond’s grandson.

In 1970, Steve Tosh joined the company He designed a range of solid-state amplifiers and speaker cabinets for guitars, basses and PA as shown below.  Steve was appointed CEO of the deArmond side of the company in about 1977: